Recently in Toronto we’ve been getting a lot of snowy Winter days, you know those days when you just want to snuggle up on your couch and watch TV with a hot cup of something!  With this mood in mind, I was inspired this past weekend to bake something homey and landed on making Apple Cinnamon Donuts.  I searched online for difference recipes and landed on a Cinnamon donut recipe which I modified a bit and added in some Apple Cinnamon tea.  I really wanted to add in Apple cider, but couldn’t find any in store so I settled with tea instead.  I also didn’t have any buttermilk, so I used a little trick of adding White Vinegar to 2% milk to form it into a buttermilk texture.  These were super easy to make and required ingredients that any basic baking pantry’s should have!  They turned out moist, dense, and yet soft, all in the same texture.  The donuts were perfect for sharing too, as they were easy to cut up into quarters for bite sized pieces.  Mmm… donuts! :)

The secrets to the best baked donuts are achieved by:
1) Buying a donut shaped pan
2) Piping the batter in the pan so they come out perfectly round!
3) Filling the donut mold full, as the fuller the donuts the more light/moist they become
4) NOT over mixing or over baking the batter, or else the donuts become super dense 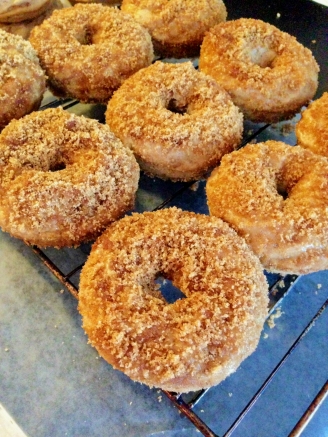 COMBINE: flour, sugar, baking powder, cinnamon, and salt.  Make sure you sift so that the donuts don’t turn out lumpy.

WHISK: together the egg, buttermilk, melted butter, and vanilla.

COMBINE: wet mixture into the dry ingredients until just combined.  Make sure you do NOT over mix the batter, or else your donuts will be very tough and dense.

BAKE: for 15 minutes and let the donuts cool for 5 minutes.