Happy Canada Day!!!  To showcase my national pride I decided to make some Nanaimo Bars for the national day of Canada.  For those who don’t know, Nanaimo bars are a type of dessert that originated from Canada, more specifically from the west coast and is named after the city of Nanaimo.  I was never a huge fan of nanaimo bars growing up, so I was a bit skeptical when I decided to bake this dessert, but I wanted to try baking something new and represent my west coast heritage!  The triple layer dessert consists of a graham crust and coconut base layer, with a hard chocolate top layer that is separated by a layer of vanilla cream custard.  The smooth layer of the custard, combined with the hard chocolate texture and soft graham crust, makes for an exciting textural experience.  I found a recipe online and edited a couple of things based on the reviews I read (i.e. omitting the walnuts because of allergies, almost doubling the custard mixture, and adding more chocolate for the top).  The recipe was such a success at work that I actually made a second batch the next day for my friends to try!  They are also a great dessert to freeze and bring out when you have surprise company over.  :D 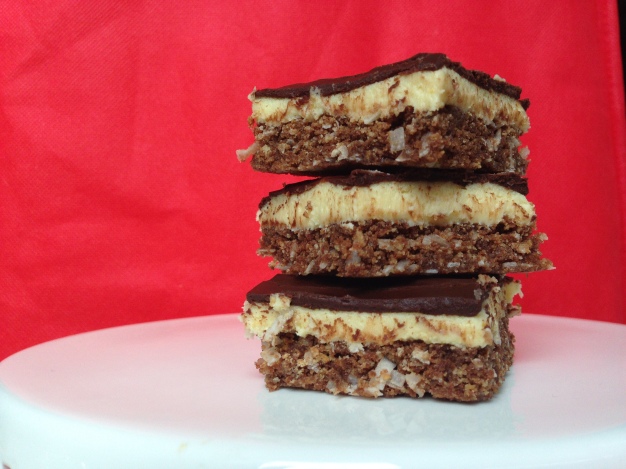 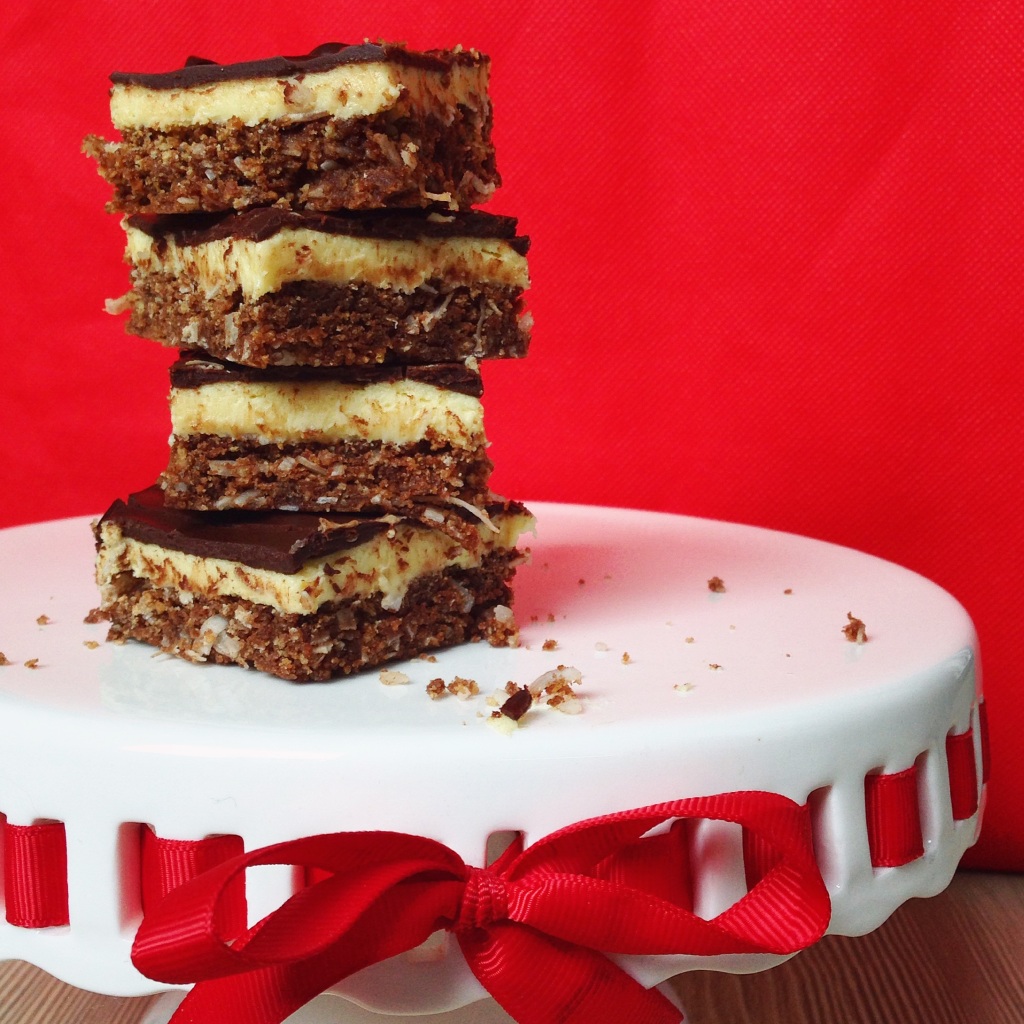 MELT: chocolate and butter in a large microwaveable bowl for 1 minute or until butter is melted, checking after 30 seconds to stir mixture.  Stir mixture until chocolate is completely melted.

STIR:  in graham crumbs and flaked coconuts until mixture is combined.  Pour mixture into the lined 9″ square pan and press down until it is firm in the pan.

BAKE: for 8 minutes and place on cooling rack to cool completely.  (turn off oven)

CREAM: together custard powder and milk in a bowl until blended.  Add in remaining 1/4 cup of butter and mix until completely combined.  Then add in icing sugar 1 cup at a time and beat until blended.  Spread custard mixture onto the cool crust and refrigerate for 15 minutes to cool.

MELT: remaining 4 oz chocolate and butter together in a microwave bowl for 1 minute or until butter and chocolate are melted, checking after 30 seconds to stir mixture.  Spread over the cooled custard layer and refrigerate for several hours or overnight before cutting the bars.

*Having tin foil or parchment paper flowing over the edges of the pan will make it easier to cut the bars, as you can use the edges to lift the whole sheet of baked goods out of the pan and onto a board for cutting!